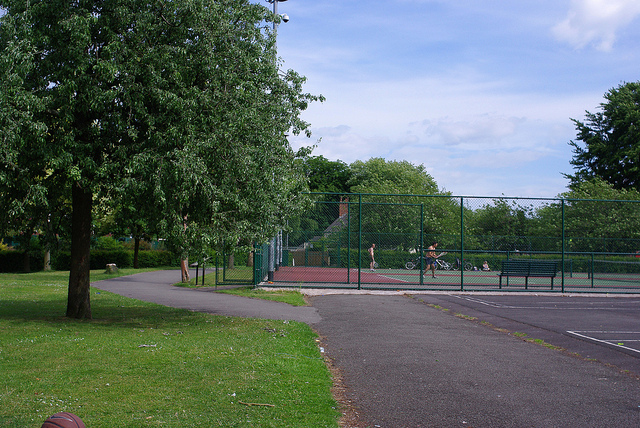 Well I can’t believe I’ve haven’t included Chorlton Park into this section yet as I do go there quite a lot during the week to walk  Mickey and my clients’ pooches. In fact before I started Dogs Buddy, I would go there in the morning before work to take  Mickey for an hour.

Chorlton Park isn’t a massive park and more of a local park for the residents nearby to have a stroll through with their dogs, or to take the kids to the play areas that they have there. It can be accessed through the entrances at St. Werburgh’s Road, Barlow Moor Road or from the top end near Nell Lane. There are also some gates which lead from the Sandy Lane streets.  In the early mornings and early evenings the park is also used by joggers and cyclists, and during the day you’ll find people going in for a game of tennis or a kick around game of footie especially on the weekends. It is a square shaped park with a path leading around the outside and a couple of centre paths which lead through the middle of the park or by the side of the tennis courts. If you’re travelling from far away I wouldn’t make a special effort to visit expecting a couple of hours walking however, if you fancy a stop off from wherever you have visited it’s worth a quick look and a your dog will enjoy a run and socialising with other dogs.